Florida is one of the best states to travel to when the weater is cold becasue in the state of Florida is is almost always warm hence its name the Sunshine state. But it is great you will always have some place to travel and explore. Florida has so much to see from the Beach, to the amuesement parks, muesuems, zoos, parks, bars, and so much more. When you think of Florida you alway think of a prefect vacation. So if you are cold get in a car and take a trip to the wonderful state of Florida.

However one other great state to visit in winter is Colorado there are a lot of things to do in Colorado as well but it is the total opposite from Colorado, you will be able to do a lot of winter activites there like skiing, snowboarding, snowmobiling, ice fishing, and so much more. Take a trip to Colorado if you are not afraid of the cold.  So these are great places to visit in the Winter time which is just around the corner.

Sixt rent a car is one of the biggest car rental companies in the world. However in 2011 they were in over 100 countries but they were not located in the USA. So in the end of 2011 Sixt decided to move into the biggest market for car rentals the USA.

Sixt opened its first location at Miami International Airport where it was are only location in the USA for several months and then we started to expand within Florida. Then we opened a location right off the Airport at Orlando. Then we opened a new location at Fort Lauderdale airport, then West Palm Beach Airport. Then are newest location in Florida is our Miami Beach location. So currently Sixt has 5 rent a car locations in Florida perfect if you are planning on taking a vacation to the Sunshine State. So if you are looking to go to the beach and get a tan you should think of Sixt rent a car.

Sixt rent a car has also started expanding in other states opening its first location in Atlanta at the Atlanta Airport the busiest airport in the world. So SIXT rent a car has opened 6 rent a car locations within the USA within a year so be prepared for Sixt rent a car to expand to somewhere near you soon. Sixt rent a car is not a new name to car rentals they have been in business since 1912 starting in Munich, Germany. From being from Europe Sixt has great connections with European car brands like Mercedes and BMW. Therefore you can rent a luxury car from Sixt at normal rental car rates with Sixt. Sixt also makes it easy to rent a car with several ways of being able to rent a car, if you want to rent online , in person or over the phone +1-888-749-8555, Sixt rent a car makes it easy. 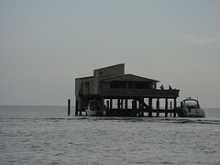 I love StumbleUpon because I constantly run across sites that I would probably never find otherwise. Save Old Stiltsville is one of them.

Located near Miami and about one mile south of Cape, Florida, Stiltsville is a (now) small group of seven houses that are situated on the shallow waters of the bay. Many of the original houses were destroyed by hurricanes, over the years.

At one time, a total of 27 buildings (houses and a business or two) were constructed there. In their heyday, some of the dwellings were popular enough to be printed on the face of postcards.

No one is completely certain when the first Stiltsville shack was constructed. The estimated date is sometime between 1922 and the early 1930s.

The owner of the original building on stilts was Eddie "Crawfish" Walker. He made his living selling beer, bait and crawfish chowder, out of the shack. What a combination!

Built in 1940, the Quarterdeck Club was a "membership only" club that was featured in LIFE Magazine in 1941. It featured a dining room, a bar, a lounge and slips large enough to accommodate a yacht.

Stiltsville was the backdrop in several episodes of Miami Vice. Part of the movie Absence of Malice was filmed there, as well. Last but not least, Stiltsville has been mentioned in numerous books.

Up until 2000, there was great interest in saving Stiltsville. Unfortunately, efforts were ineffective and fundraising came to an abrupt halt.

I hope you take the time to find out more about Stiltsville. I really enjoyed learning about this shrinking little ghost town IN the bay.

A new law went into effect in Florida on Saturday that’s going to make literal animal lovers sad pandas. Having sex with animals is now against the law in Florida, a state that that had written off creating such a law several times not because they condone it—there are Miami animal cops, after all—but because they really thought it was something that didn’t happen, and therefore unworthy of legislation prohibiting it.

My first reaction to this was one of dark irony—we used to have laws in the country that legally forbade gay sex, which was an outrage, but Florida is only just now instituting a law to protect animals from sexual assault by humans. Oh, the cleverness of us!

I have a hard time believing that these legislators didn’t think there was a problem with people assaulting animals sexually. Growing up, I knew of several people who did such things and bragged about it—I am from the Midwest, but I doubt it’s unique to my region—and I witnessed a couple of instances of it myself, believe it or not. If people are going to commit acts of cruelty against other people—especially children, the elderly, and the mentally handicapped, who are all such easy targets—do you really think they’re going to leave pets, an even easier target without a voice, alone?  Hell, Louis CK even copped to it on a live video recording. Don’t you think that any legislation that essentially protects beings from being harmed by others is good to implement?

Of course, just because we can’t speak the same language doesn’t mean that animals are beneath us or witless; dolphins, after all, may be given non-human person status someday due to their complex level of intelligence. But until an animal can provide his or her complete consent in a language we can all understand—and I know how silly that sounds, but that’s the way it’s going to have to be!—sexual activities with them should be outlawed, period.

We Support
Climate Activism
Click to reach the League of Conservation Voters.
Conversation Processing Intelligence™ beta website!
Click here to visit the hub of the Klat Network.
This site is part of the Klat network of blogs, forums, and communities.

Sixt rent a car in Florida

Stiltsville in the Bay
Welcome to Florida Journey

No Sex with Animals in Florida—Anymore